A simple parts replacement on a car can often turn into a costly visit to the mechanic when they tuck on hours of labour. It also seems unnecessary to take your vehicle all the way the garage for a simple fix that you could easily do yourself with the right parts.

What is a fan belt?

In older cars, the fan belt literally turned the cooling fan, hence the name. In modern cars, the cooling fan is turned electronically but your engine still has belts that are used for various functions.

The number of belts your engine has and the configuration of them will depend on the make, model and year but generally, when we speak about the fan belt, we are referring to the drive belt or alternator belt (usually a serpentine belt in modern vehicles).

Older vehicles used primarily v-belts (also known as accessory belts), a series of individual belts coming off the crankshaft. Each belt had its own individual function such as turning the alternator or the water pump. They are so-called for their v-shaped grip. 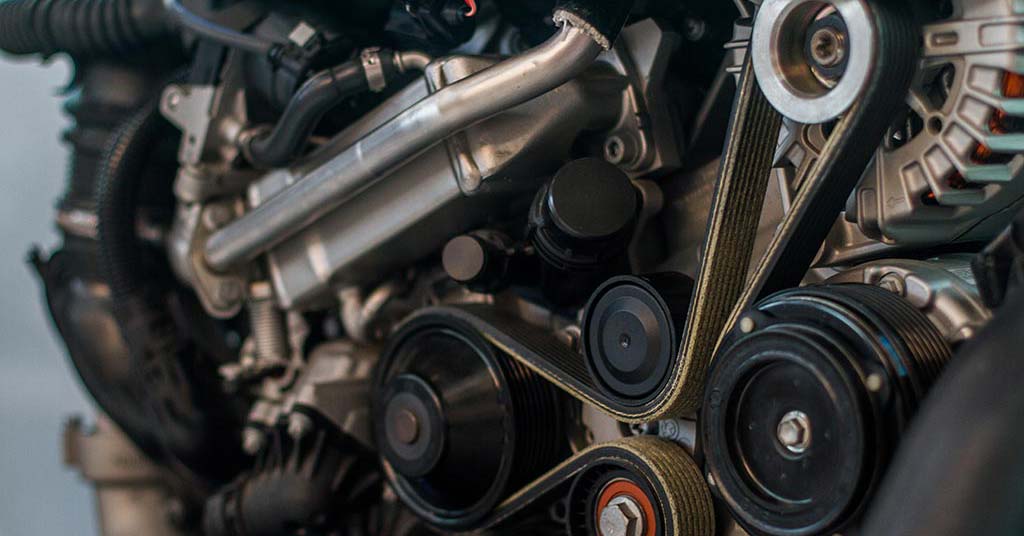 Modern vehicles have a longer serpentine belt, a single continuous belt that drives multiple functions in your engine. These will include the crankshaft and alternator but can also include the water pump, power steering pump and air conditioning compressor.

What happens when your fan belt breaks?

Your fan belt provides power to vital systems in your engine so a broken or worn belt will affect multiple functions. If engine accessories that are driven by the fan belt are not able to spin at the correct speed your entire electrical system can lose power.

You might also lose power steering which will make the wheel suddenly harder to turn. If the water pump is affected, the cooling system will malfunction and the engine will most likely overheat. A broken belt can also affect the alternator leading to a dead battery.

Can you replace a fan belt with pantyhose in an emergency?

Yes and no. This trick may work but it will only work with a v-belt configuration engine. This is because the pulleys have deeper grooves due to the v-shaped grips on the belts. Serpentine belts have smoother pulleys so there would be no grip.

But even as a replacement v-belt, pantyhose will last a few kilometres at most before sliding off, breaking or melting. Interestingly, the very first fan belts were made from leather strips but they had the same problem. The intense wear would make them snap too frequently.

How to replace a fan belt

This is a basic guide on how to replace a serpentine belt in a modern car. A belt that needs replacing will be visibly frayed, cracked and worn. If you’re unsure what type of belt you need, consult your parts supplier for advice.

Most modern cars have automatic belt tensioners, making this process much simpler. This guide assumes the presence of an automatic tensioner.

Disconnect your battery. This should be done before any engine repairs. Use a wrench to loosen the black (negative) cable. There is no need to disconnect the red (positive) cable.

Locate the serpentine belt. The belt might be behind an engine cover at the front or side of the engine. To be sure of its location, consult your user manual.

Find the belt routing diagram in your user manual or take a photo of the belt still in place so you know how the new one should run. Some engines have a diagram sticker on the cover.

Release the tension on the old belt. Auto tensioners have either a hole for a ratchet or a bolt to hold a socket wrench. Either way, twist your wrench away from the belt to relieve the tension.

With the tension relieved, you can now pull the old belt from the various pulleys, starting with the auto tensioner. Remove any pieces that come off the belt as well.

Compare the old belt to the new to make sure they match in width. If they don’t, you have bought the wrong belt. The old might be slightly longer due to stretching.

Route the new belt through the pulleys just like the old one was. Consult your user manual or the photo you took to make sure it is correct.

Finally, apply pressure to the auto tensioner and put the belt over the pulley. Once in place, release the pressure so that the tensioner holds the belt in place. If the belt is still loose after this step then the belt is too long.

If you still don’t feel comfortable changing a fan belt yourself, ask your local mechanic if you can supply the belt and they just take care of the labour. This way it will still be a saving for you.

At Masterparts, we stock a comprehensive range of OEM quality serpentine belts, including high-quality Dayco belts.

These drive belts are designed to meet or exceed OEM standards. They offer superior strength, flexibility and life span. They’re trusted by automotive technicians for their quiet performance and wear-resistant construction.

We also offer fan belts from other leading international manufacturers, such as ContiTech and Gates Micro-V belts.

If you need to replace a worn or broken fan belt and want advice on which belt you should buy for your vehicle, contact us on 021 657 5757 or visit your nearest Masterparts branch.

How to Flush Your Radiator

The 2017 Kinsey Report: Which Cars Have the Cheapest Parts?

Best Source of New BMW Parts in the Cape